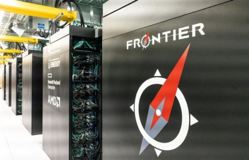 San Francisco, May 30 – US-built supercomputer titled ‘Frontier’ on Monday dethroned Japan’s ‘Fugaku’ (developed by the Riken Institute and Fujitsu), as the world’s fastest machine with 1.1 exaflops of performance on the 59th TOP500 list published by an international conference of computer experts.

The Frontier supercomputer at the US Department of Energy’s Oak Ridge National Laboratory is the first to achieve an unprecedented level of computing performance known as exascale, a threshold of a quintillion calculations per second.