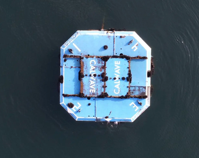 CalWave has been working on its xWave clean power technology for many years now, and has announced the successful conclusion of an extended open-ocean test off the coast of San Diego, in which the device demonstrated over 99% system uptime.

Wave energy is one of the less common renewable energy sources, and while there are many wave energy projects under development, the industry itself can be considered more or less embryonic at this stage. There's some promise in it; as CalWave points out, "ocean waves are 20-60 times more energy-dense, predictable and consistent compared to other forms of renewable energy."