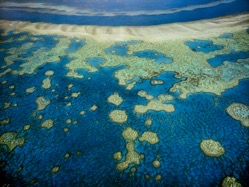 The headlines were dire: “Half of the Great Barrier Reef’s corals have been killed by climate change,” CBS News reported in October 2020.