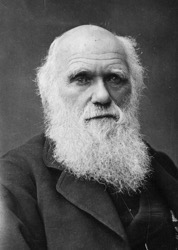 Charles Darwin is primarily famous for two things: his majestic Victorian beard, and his incredibly influential work on the theory of evolution. Darwin, per Britannica, embarked on his legendary journey on the HMS Beagle in the 1830s. On the trip, he would do and see much that would shape his view of the world, and his groundbreaking "On The Origin Of Species" was released in 1859 as a result.