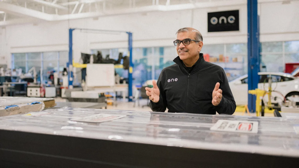 Electric vehicles have reached a tipping point in the U.S. But even as EVs see sales increases, the vehicles’ batteries may still have to change significantly before they can fully replace fossil-fueled cars and trucks. That’s the argument made by Mujeeb Ijaz, an entrepreneur who previously worked on Apple’s secretive electric car project.